Pack 227 has once again received the Pope Paul VI National Catholic Unit Excellence Award. Cooperation, development, and program are the key words in the recognition of Catholic chartered units in earning this annual award. The adult leadership responds to training not only in Scouting lores, but training in Catholic National Catholic Leadership Development, and religious counseling. The Scouts in each Pack, Troop, Team, and Crew/Ship respond by participating in the religious emblems program respective of their status in Scouting.

Thank you to everyone who built a car and participated in this year’s Pinewood Derby. Congratulations to all the winners including our three overall winners Aidan Baer (3rd), Daniel Varner (2nd), and William Rasmussen (1st).

The complete results from all levels and heats can be found at this link.

Kathy and Melissa Rodriguez were presented with the Unit Exceptional Scouter Award at the Pacifica District Dinner on January 10th. Kathy and Melissa are the current leaders of Den 6 (Webelos). They also served on a previous den leader “tour of duty” from 2013-16. Kathy has acted as our Religious Emblem Coordinator and both also volunteer as Nova/Supernova mentors. They are always willing to help the pack in any way they can. Congratulations and thank you, Kathy and Melissa!

Every year Cub Scout Pack 227 in Huntington Beach selects a charity to focus its outside fundraising efforts. This year that charity was “Joshua’s Journey of Hope” which is dedicated to finding a cure for the disease cystinosis. Cystinosis is an “orphan” disease with about 500 people, mostly children, stricken in the United States and approximately 2,000 worldwide. It is a metabolic disease in which the amino acid cystine, gets into the cells but has no transporter out. Because of the defect in transportation, the cell crystallizes causing early cell death. Cystinosis slowly destroys the organs in the body including the kidneys, liver, eyes, muscles and the brain. With such a rare disease affecting such a small population, research money is scarce to nonexistent. And yet research on complicated diseases like cystinosis often lead to advancements in other rare diseases.

“Joshua’s Journey of Hope” is named after Joshua, a 6th grader and former member of Pack 227. Over the past year the pack raised money for this charity in a number of ways including hosting a lemonade stand, a “Get Air” fundraiser and simply having Scouts collect and donate loose change from home. When all was said and done they had collected $2,000 which was presented in the form of a check to Joshua and his father at the pack’s annual religious retreat on November 5th. Joshua is currently a member of Boy Scout Troop 227 where is a Tenderfoot. He is a loving, spirited and joy-filled boy. He is truly an inspiration to all who meet him.

Posted in Uncategorized | Comments Off on Joshua’s Journey of Hope

Pack 227 received the following certificate from the California Coastal Commission as part of our annual beach cleanup held on March 18, 2018 at Bolsa Chica State Beach. In the letter that accompanies this certificate, Eben Schwartz states, “Please accept this certificate as a symbol of our appreciation for all the time, energy, and enthusiasm you have lent to the program. By getting involved and caring for our beautiful  coast and shorelines, you have helped preserve California as a wonderful place to live and play, now, and into the future.”

Posted in Uncategorized | Comments Off on Adopt-A-Beach Certificate

Kim Baer was presented with the Unit Exceptional Scouter Award at the Pacifica District Dinner on April 12th. Kim is the current den leader of Den 11 as well as the Scouting for Food chair. She was also the driving force in making the 2017 Pack charity (The Joyful Child Foundation) such a success. She is always willing to help the Pack in any way she can. Congratulations and thank you, Kim!

Tait Skifstrom was presented with the George Meany Award at the Pacifica District Dinner on April 12th. This is a national recognition approved by the AFL-CIO Executive Council. It is presented to an adult union member who has made a significant contribution to the youth of their community through Scouting. Each AFL-CIO city central labor union and each AFL-CIO state federation is permitted to give only one award annually. The purpose of this award is to recognize the recipient’s outstanding service to youth through the programs of the Boy Scouts of America. Tait was recognized for his many contributions as den leader, religious emblem chair and this year’s beach cleanup coordinator. Congratulations Tait!

Posted in Uncategorized | Comments Off on George Meany Award

The lemonade stand was a HUGE success, and they raised $376, which is incredible!!! Pack 227 salutes Den 7 and encourages the other dens to do what they can to raise money for this great charity. In addition, Den 7’s efforts were also documented in this article on the Huntington Beach News Website. We thank them for their support publicizing our pack. Joshua’s Journey of Hope is a charity which raises money to find a cure for Cystinosis, an incurable metabolic disease. More info can be found on their website, Joshuashourney.org.

“The Pack Awakens” was the theme of Pack 227’s out-of-this-world Blue & Gold Dinner. You are welcome to view the two slideshows the Pack enjoyed that evening via the Pack Slideshow page. 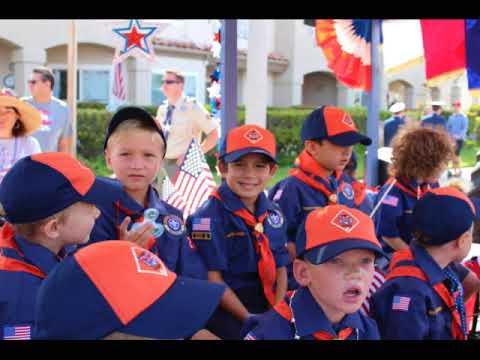 The 2018 Pack 228 Pinewood Derby was held on Saturday, January 20th at the Huntington Beach Elk’s Lodge. This year we had 58 racers compete in seven divisions. Congratulations to our top three racers, Roman Pfau, Aiden Baer, and Justin Tolly. Click here to view the complete results from all divisions. Also, congratulations to the special awards winners: